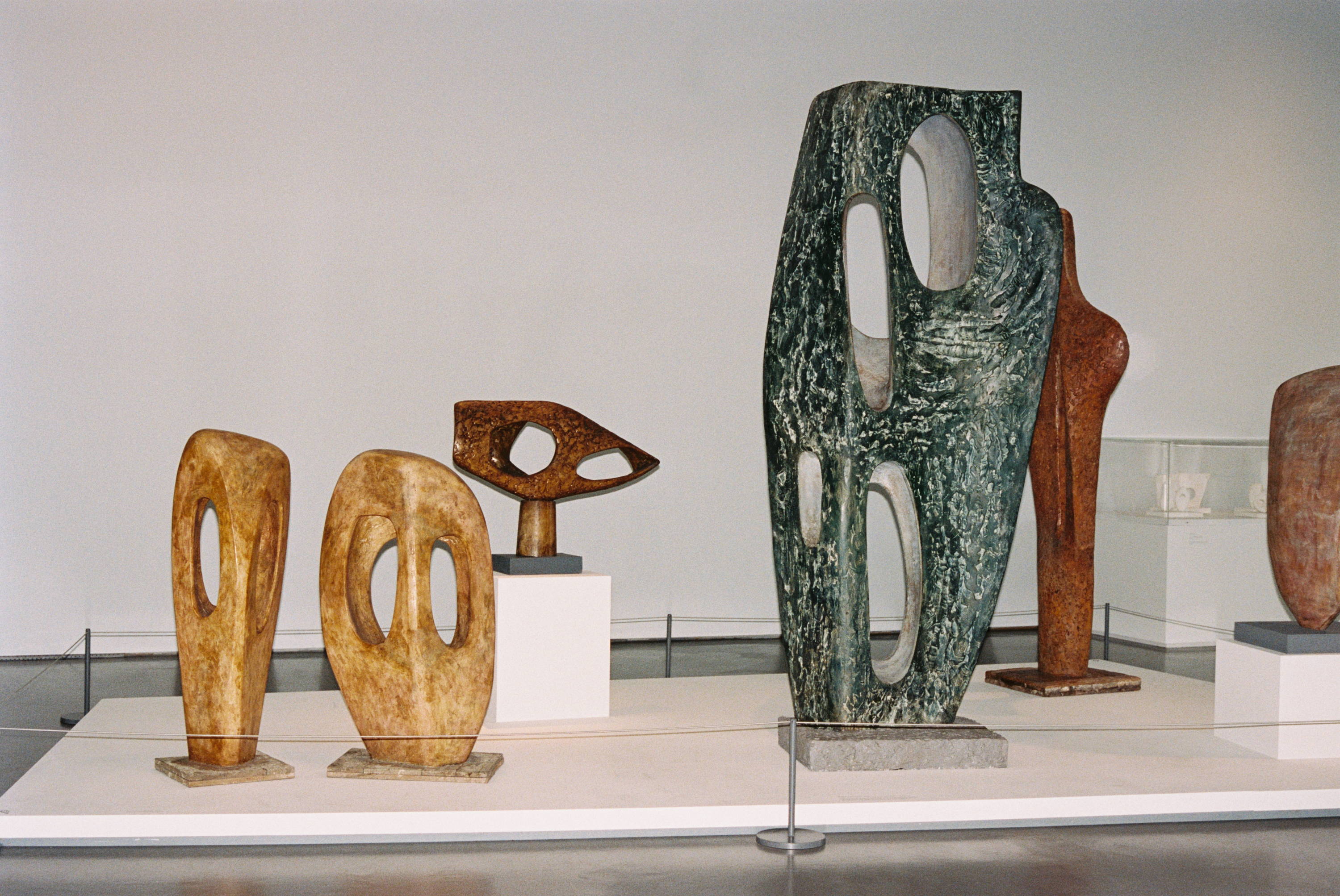 TEN THINGS YOU MIGHT NOT HAVE KNOWN ABOUT BARBARA HEPWORTH
"I rarely draw what I see, I draw what I feel in my body."

One of the most important British artists of the 20th century, whose standing has continued to rise exponentially in recent years, Hepworth is now inarguably a modernist icon. An advocate for the dynamic nature of art, Hepworth insisted that her sculptures should be patted, walked around and peered inside. When photographed with her work, Hepworth is nearly always physically engaged with the piece. Climbing inside, staring through or with an arm hooked around, her gaze confronts the camera and the way in which we frigidly conserve artworks, behind glass and on plinths.

As her cultural and critical importance continues to rise, we’ve collected together ten facts about a sculptor whose influence can be felt throughout our jewellery collections.

1.     She liked it when people touched her art

After her 1962 exhibition in the Whitechapel Gallery, she was thrilled to find evidence of her work having been stroked and prodded. When her work was returned to her studio, she described her pleasure at these traces of physical engagement: “I could tell by the marks on them just where, and how they had been touched, felt, caressed. Their hands had followed the main rhythms and movements of the form.”

2. She knew she wanted to be a sculptor from the age of seven

After seeing a film on Egyptian sculpture in school, it became a ‘fixation’. A decade later, she would win a scholarship to the Royal College of Art.

Born in Yorkshire, Hepworth continually attested to the influence of her childhood home on her work. The contradiction between an industrial town and its natural landscape is a tension that re-appears throughout Hepworth’s body of work, studying the relationship between human figures and their natural surroundings.

4.     She advocated for the democracy of public art

Her enthusiasm for outdoor art was inspired both by its egalitarianism and its impact on the piece itself, reacting to the light, the weather and the seasons. In a letter to her friend, the critic Herbert Read, Hepworth gleefully imagined an art critic having to trek through the wilderness: “Imagine the critic having to climb a hill, or walk a mile through a forest … to see a sculpture.”

Her second marriage was with the abstract painter Ben Nicholson. Together, he and Hepworth had triplets in 1934. She described how they had been preparing for one child and so, for the first few days, relied heavily on ‘improvisation’.

6. During her exhibitions, she used to place potted plants on her work

Her distaste for the flat backgrounds of white cube galleries encouraged Hepworth to create exhibitions that were more haphazard, heralding a more modern structure of museum display. She also paid herself for the bricks that were used to display the pieces during the 1968 retrospective at the Tate, determined that they were to be perfect. Utilitarianism at its most lavish.

7. She rubbed elbows with Picasso

In the thirties, Hepworth travelled around Europe with her husband Nicholson. Together, they met and visited the studios of some of the most influential modernist artists such as Pablo Picasso, Naum Gabo, Jean Arp and Piet Mondrian.

In 2015, the Bank of England pledged to design a new £20 note featuring a portrait of a British visual artist. Due to the under-representation of women in the visual arts, only one female candidate featured in betting odds on the winner: Hepworth.

9. One of her most famous sculptures was simply the view from her studio window

Pelagos (1946) is one of the most recognisable of her sculptures, with its taut strings stretching between the hollowed out, spiralling wood. Inspired by the St Ives bay as seen from Hepworth’s window, this sculpture introduces some of her most iconic artistic techniques.

10. John Lewis commissioned her to create a sculpture for their Oxford Circus store in 1963 and it’s still on display today

Their new store was built to replace their previous premises which were damaged in the war. John Lewis had first approached Jacob Epstein however he declined due to his commitment to other commissions. Hepworth’s sculpture is called Winged Figure and is estimated to be seen by 200 million people every year.

Added to your cart: